Footage of one of the Ocean Bottom Seismometer’s been deployed. The instruments – the Seismometer, the acoustic release and a hydrophone, sit in the orange float. With the anchor, it weighs about 200 kg. Can you spot the squid ?!

The SEA-SEIS project has successfully deployed 18 NAMMU Ocean Bottom Seismometers (OBS) from the iMARL pool off the south and west coast of Ireland. The research vessel, the RV Celtic Explorer left Cobh Horbour, Cork on Tuesday 18th September. The cruise was a few days shorter than the expected 3 weeks. To get the most up-to-date news on the expedition, please look at https://sea-seis.ie.

A competition was run in schools to name the 18 OBS’s. Not only did Irish schools enter the competition, but there was also an entry from a school in Italy! 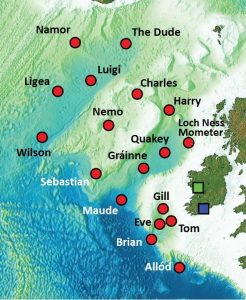 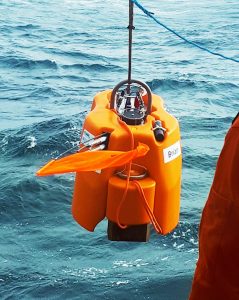 Deployment of OBS02, named Brian (after Brian Jacob, who lead the work on the continental nature of the basins west of Ireland, which lead to the Irish territory increasing by a factor of 10. He was the Senior Professor of the Geophysics Section, DIAS, from 1989 until 2001) 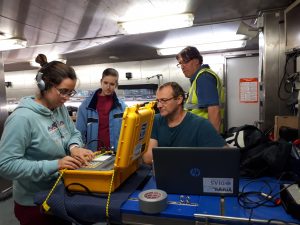 The scientific crew testing the instruments before deployment